In particular, two new drugs developed by Hanmi Pharmaceutical Co., Ltd. are expected to be approved by the U.S. FDA this year. "Rolontis," a treatment for neutropenia that had its technology licensed out to Spectrum Pharmaceuticals, Inc. and "Oraxol," which was licensed out to Athenex, Inc. as a treatment for metastatic breast cancer, under priority review by FDA are about to announce the results of their BLA/NDA approval (biologics license application; BLA), respectively. 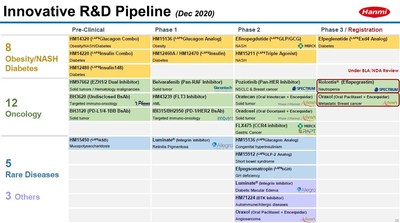 "R&D capabilities of Hanmi Pharmaceutical Co., Ltd. and the strong trust among multiple partners remain solid," stated Dr. Kwon, emphasizing "The new two drugs will be approved by FDA in the nearest future, and the expectation for Hanmi's pipeline in this year is even greater than ever."

LAPSTriple Agonist (HM15211), a triple agonist, has demonstrated a fatty liver reduction effect of 50% or greater through the recent clinical trials in U.S. and is being developed to be the most effective NASH treatment global wise. The fatty liver reduction effect within 12 weeks was as high as 80% compared to that of the placebo control group, and the liver enzyme lowering effect was also statistically significant.

Based on this, global Phase 2 clinical study for LAPSTriple Agonist is currently underway, and it has received Fast Track designation from FDA to expedite drug development for NASH.

U.S. FDA also designated LAPSTriple Agonist (HM15211) as an orphan drug for the treatment of primary sclerosing cholangitis (PSC) and primary biliary cholangitis (PBC) in 2020, and the indications will be expanded to include idiopathic pulmonary fibrosis (IPF) and chronic obstructive pulmonary disease (COPD) as well.

A Phase 3 clinical study (Amplitude-M) on Efpeglenatide, which is being developed as a treatment for diabetes, was recently completed and met the primary endpoint by successfully achieving "30-week reduction in glycated hemoglobin(HbA1c) compared to that of placebo" in dose cohorts. The study also confirmed its weight loss effect, which was a secondary endpoint. Hanmi Pharmaceutical Co., Ltd. is planning to maximize treatment effects by combining Efpeglenatide with another new drugs such as LAPSGlucagon Analog(HM15136).

In addition, LAPSGLP/GCG(Efinopegdutide), which was licensed out to MSD last year, has entered the Phase 2 clinical trial this year, and the development as a NASH treatment will be accelerated.

Poziotinib, which succeeded in clinical trials for HER2 mutated non-small cell carcinoma (NSCLC) patients last year, is planned to be submitted to the U.S. FDA approval this year. Belvarafenib (HM95573, solid tumor), which was licensed to Genentech, Inc., is about to enter global clinical study, and a dose escalation and expansion clinical study on FLT3/SYK dual Inhibitor(HM43239), which has demonstrated complete remission in patients with FLT3 mutation acute myeloid leukemia(AML) which no existing treatments have successfully treated, is in rapid progress.

Hanmi Pharmaceutical Co., Ltd. is also pursuing T cell-targeting anti-cancer drug development substances by identifying pre-clinical substances based on AI platform technology with Standigm, Inc. In addition, the potential for the combination of oral immune anti-cancer drug candidate substance (FLX475) from RAPT Therapeutics, Inc. with Keytruda from Merck as a gastric cancer treatment is under research.

At the same time, a robust study is being conducted that involves the bispecific antibody adopted from Phanes Therapeutics, Inc. This study aims to increase the anti-cancer effect in the tumor microenvironment (TME) through synergy with Pentambody, which is also the bispecific antibody platform technology developed by Beijing Hanmi Pharm. Co., Ltd.

Furthermore, clinical study on PD-1/HER2 bispecific antibody being co-developed with Innovent Biologics, Inc. is currently underway in China to find an appropriate dose for patients with solid tumors.

Hanmi Pharmaceutical Co., Ltd. also plans to focus on its role as a pharmaceutical company for a small number of patients with rare diseases area in which has high unmet needs.

LAPSGLP-2 Analog, which is being developed as a treatment for short bowel syndrome, that occurs in three per million, confirmed its safety and once-a-month dosing potential in the first-in-human, phase 1.

LAPSGLP-2 Analog was also designated as an orphan drug by FDA and EMA in 2019 and was subsequently designated as a drug for rare pediatric diseases (RPDs) by FDA in 2020. It will enter a Phase 2 clinical trial this year.