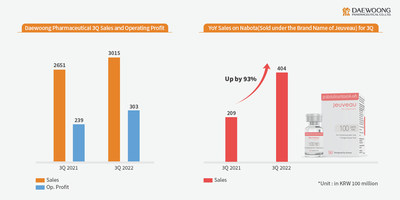 Daewoong Pharmaceutical (hereinafter, Daewoong) has exceeded KRW 300 billion in quarterly revenue for the first time, thanks to the strong export performance of the botulinum toxin Nabota, favorable exchange rates, and the growth of high-value products including Fexuclue, which was released last July.

Of especial note is Nabota, a botulinum toxin product which has seen a 93.3% growth in revenue YOY, achieving KRW 40.4 billion in sales. Of this figure, exports accounted for KRW 32.6 billion, a 130.2% increase from KRW 14.2 billion in the same period last year. Daewoong established a foothold in Europe, the second largest pharmaceutical market in the world with the release of Nabota in the UK last September. The company is expanding its market share through active marketing in the United States, the largest market. With the more natural treatment results of high-purity toxin products becoming increasingly known, sales have also increased in Southeast Asia and Central and South America, regions with sizeable markets for aesthetic plastic surgery.

With a presence already in the UK, Daewoong plans to enter valuable European markets, including Germany and Austria, within the year, while reinforcing marketing and training efforts targeted toward overseas medical professionals for the post-COVID era, in an effort to increase and develop sales and distribution channels overseas.

As for ethical drugs (ETC), sales recorded KRW 209.5 billion, a 6.5% increase from KRW 196.7 billion in the same quarter last year. Fexuclue, a treatment for gastroesophageal reflux disease (GERD), was made available for inclusion in healthcare benefits last July, after which it saw a rapid growth in market share and an increase in outside pharmacy prescriptions, as well as the establishment of a stable presence in major university and general hospitals and local markets. Furthermore, high-profitability products including hyperlipidemia treatments Crezet and Litorvazet, GERD treatment Nexierd, and Axid, an anti-ulcer product, have also contributed to the growth in the item category.

With clinically proven efficacy and safety, Fexuclue enjoys a strong prospect of increased acceptance and use among primary general hospitals, especially now it has acquired additional treatable indications for acute gastritis and gastric mucosa lesions associated with chronic gastritis, which are found commonly among Korean patients. Both the visibility and sales of the product are anticipated to grow considerably once actual prescriptions begin in the second half of the year.

In over-the-counter products (OTC), revenue stood at KRW 34.8 billion, representing a 15.9% increase from KRW 30 billion in the same quarter last year. EZN 6, an antipyretic analgesic, saw a 55% growth YOY due to the COVID pandemic, while Urusa, a fatigue remedy, grew 10% YOY. EasyDerm, a wet dressing, also grew by 28% YOY, while the effort to increase its distribution through pharmacies is set to continue through the second half of the year as well. Health functional foods saw a 40% growth YOY, with the offline distribution channels for Senomega, a brand of products designed to improve blood circulation, is set to expand.

An official from Daewoong stated, "With the successful establishment of Fexuclue, the No. 34 domestically developed new drug, in the market and Nabota's strong performance in botulinum toxin market in US and Europe, an unprecedented KRW 300 billion in sales has been achieved", adding that "Since this outcome is attributable in large part to Fexuclue and Nabota, wholly developed by Daewoong, this sales result is especially meaningful to us. We will continue our endeavor to become a global pharmaceutical company with a competitive edge in diverse business areas".

Meanwhile, Daewoong continues to acquire additional treatable indications for Fexuclue and to introduce Nabota in the treatable indications market, while striving to obtain marketing approval for Enavogliflozin, the first SGLT-2 deterrent to be developed by a Korean pharmaceutical company, from the Ministry of Food and Drug Safety within the year, as well as working toward obtaining biomedical product approval in China for Nabota. Furthermore, clinical trials are currently underway for DWN12088, a potential drug candidate for pulmonary fibrosis designated for fast-track approval by the U.S. Food and Drug Administration last July. Daewoong is also running number of R&D programs to develop cell and genetic drugs, while continuing on with its efforts to secure new pipeline for stem cell drugs and to bring in technology platforms for drug preparations and formulations.